from Feast for Days 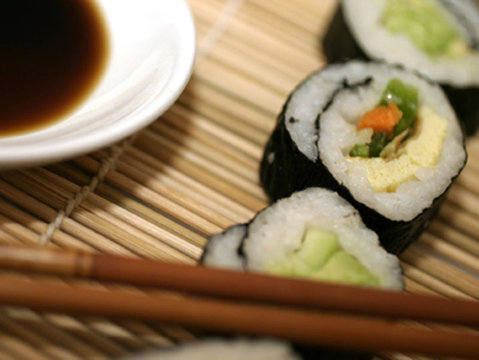 Making sushi at home is one of those things that might sound impressive, but is totally easy. And it just happens to be fun, too. Fanning! Filling! Rolling! It makes playing with your food part of the process.

We'll make a variety of sushi rolls, including some vegetarian and vegan options, and prepare some appetizers on the side (miso soup, edamame, etc - the staples!).

Diana is a teacher-turned-designer and a co-founder of GirlsGuild, an arts apprenticeship service.

Former marketing professional. Now exploring everything else and embracing life along the way. Works at Feast for Days, though still confounded as to where the "On" button is on the stove.

elizabeth123
about 1 month ago

This is a smart blog. I mean it. You have so much knowledge about this issue, and so much passion. You also know how to make people rally behind it, obviously from the responses. dumpsclinique

elizabeth123
about 1 month ago

I havent any word to appreciate this post.....Really i am impressed from this post....the person who create this post it was a great human..thanks for shared this with us. ccv online

Hey ya'll, thanks for coming out yesterday! :)

It was great meeting & cooking with everyone - I hope you had fun with it too. (And if I didn't get a chance to talk to you too much, I'm sorry! But hopefully we'll run into each other again at another feast sometime.)

In the meantime, here are links to the recipes I followed/vaguely referred to, with some notes about how you can adapt and easify (that ought to be a real word) them.

SUSHI RICE
- http://www.foodnetwork.com/recipes/emeril-lagasse/mitsukos-perfect-sushi-rice-recipe/index.html
- This recipe is more complicated than it needs to be. It can be super easy!
- When he says "Japanese rice" he means short grain white rice, also often referred to as, yup, sushi rice. I found it in the bulk section at Central Market, but any grocery store with a half decent Asian section should carry it.
- This recipe (& many others) call for rice vinegar + sugar + salt. Easifying tip: you can buy "seasoned rice vinegar" which is already mixed with sugar and salt, and save yourself the steps in the recipe. Then all it really takes is to cook some rice and mix in the seasoned vinegar. That's what we did.

SUSHI FILLINGS
- I didn't use a recipe for this, just picked up the standards. You can pretty literally roll ANYTHING in rice and seaweed and call it sushi; just google "sushi recipes" for ideas.
- The only thing to keep in mind is that you generally want to use stuff that can be cut to matchstick size. Big thanks to Olivia, Kirsten, Dominic, & Jonathan for their chopping skills yesterday!
- If you want to use raw fish, it has to be sushi-grade. In Austin you can get sushi-grade fish at Central Market, Whole Foods, and DK Sushi Market (and probably anywhere they sell sushi in the deli section) - just ask at the seafood counter. It comes frozen, you put it in the fridge a couple hours before use to thaw it out enough to cut it, and once it's at room temperature it needs to be eaten right away. It's also crazy expensive (around $20 for a 12-14oz. piece), so unless you're trying to impress your guests -- you were impressed, right? ;) -- it's probably better to go with crab or smoked salmon.
- Speaking of crab & smoked salmon, by 'crab' I mean imitation crab, unless you're still trying to impress your guests. Imitation crab is pretty much the hot dog of the seafood world (ie. processed into deliciousness!), which is why I worry less about it going bad if you end up with leftovers in your fridge overnight. Smoked salmon, is by nature of being smoked, already preserved, so if it's properly wrapped up it'll last decently long in the fridge.

SUSHI MAKINGS
- You'll need sheets of seaweed to complete your concoctions - the seaweed is called nori, and you can find it at most grocery stores with an Asian section.
- Here's a little secret: the bamboo rollers are helpful but not necessary. You can in fact achieve almost the same effect by placing your seaweed & rice on a sheet of plastic wrap and using that to help you roll it. The bamboo is definitely more fun, so if you want to go that route you can get them for like $2 at Central Market, Whole Foods, the HEB on 41st... probably pretty much anywhere.
- Here's another little secret: the rolls we made were all seaweed outside, rice inside. You'll notice in sushi restaurants that a lot of rolls are inside out; you can do that by flipping over your rice/seaweed (definitely use plastic wrap for this!), placing the fillings on the seaweed side, and rolling inwards with the rice on the outside.

MISO SOUP
- http://allrecipes.com/recipe/miso-soup/Detail.aspx
- We riffed on this recipe a fair bit; Carrie & Randi Lee did an amazing job in charge of it!
- The recipe calls for dashi (a powdered flavoring made from bonito fish), which is essentially a fish-based version of MSG. You can add it to soup stocks to make them deliciously salty, but at $4.99 a box when we only needed one pouch, I decided against it.
- Instead we added 'wakame' seaweed flakes for bonus points on authenticity (and a healthier option). They come dried, in a plastic pouch, and you just sprinkle some into the soup - remembering that they're going to expand as they soak up the water, so just a little is enough.
- You can get wakame flakes alongside miso paste and all the other Japanese ingredients, in the Asian section of the grocery store (except at Wheatsville I've found miso in the refrigerated section with the tofu). Incidentally, you can also buy packets of miso soup in powder form - just add water & stir.
- We also added shiitake mushrooms, mostly just because I had bought them for another recipe we didn't end up making. But mushrooms are a common addition to miso soup, as are clams.
- A sidenote about miso paste: it's one of my favorite staples as a seasoning. You can use it in soups, dressings, marinades, stir-frying... Seriously. Google 'miso recipes', you'll get stuff like: http://stonesoupvirtualcookeryschool.com/2011/11/miso-eggplant-steaks/ - So good.

GOMAE (which I think we renamed as SPINACH BALLS)
- http://justonecookbook.com/blog/recipes/spinach-with-sesame-sauce/
- You can get all fancy and follow the step-by-step picture recipe, which calls for things like a mortar & pestle (!!!), or you can do what we did: wash & boil spinach, squeeze out the water, toast sesame seeds (we used black, but it's more common to use white) and grind them in a food processor/Magic Bullet, mix ground seeds with seasoned rice vinegar (see the note about seasoned vs. unseasoned in the notes on sushi rice), top spinach bunches with sesame paste. Darcy totally rocked it following those steps.
- OR, you can do it the Dominic Way (TM) - boil spinach, squeeze out water, top with store-bought sesame dressing or peanut sauce.

ROASTED EDAMAME
- http://www.grouprecipes.com/45078/roasted-edamame.html
- We used red pepper flakes instead of cayenne, and smoked paprika instead of plain - and Pete was a superstar at adjusting all the seasonings to the doubled recipe.
- This is a super easy snack or side dish; and easy to experiment with seasonings to find variations you like. You could also make a big batch of them and freeze some for later; just throw them back in the oven to thaw out and crisp up again.

That should cover it! Leave a comment if any of this is confusing, or if you have any questions I didn't answer.

Thanks again for joining the feast - and if you decide to host one of your own, count me in. :)

Eek! Thanks for checking, Olivia! It's happening at Jonathan's apartment, where the address is:

Also, if anyone happens to see this in time - are any of y'all vegetarian or vegan? Picking up the groceries in an hour, so I'll get veggies and fish proportionately. :)

Kirsten Fields
over 7 years ago

Thanks Diana! I eat everything.

Olivia Nagle
over 7 years ago

Hey! Just wanted to double check on location as it still lists tba!
Thanks
Olivia

I'm not sure if the system will send you a notification about the comment I posted above, so just in case: 2425 E. Riverside Drive, Apt 232. See you soon!

Jonathan Lewis
over 7 years ago

Hey friends. We've been having some problems with the registration page. So even if you get an error message, after you click register. You are most likely still registered for this class. Sorry for the confusion, we are working to fix this problem.

This event has 0 seats left